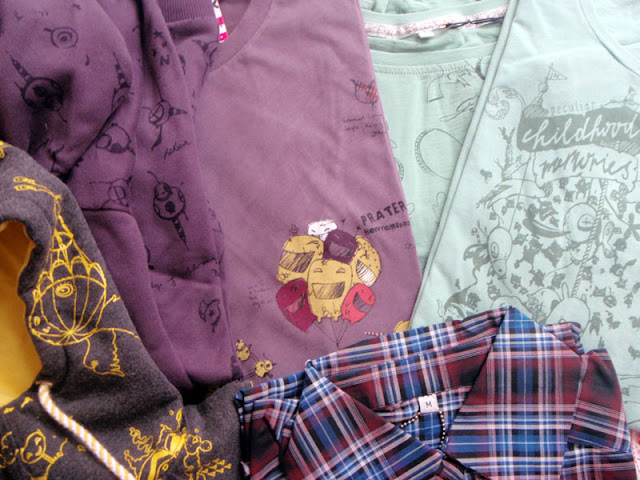 Just before Christmas I received a box full of goodies from my sixxa friends, because of the Christmas rush I only found some time to tell you about the rad Austrian brand today. Sixxa's garments are full of goodness, illustrated with little characters, designed in Vienna and manufactured in Europe. The cloths are tailored out of Eco friendly fabrics that are not only make it easier for Mother Nature but feel great on your skin.

If life was a book how would your story go?


Amy Purdy has lost both legs due to meningitis, is a snowboard pro and entrepreneur among many other things. In this video Amy highlights some key moments of here personal story and than speaks about the power of imagination. Having experienced a life changing meningitis myself I am super inspired by Amy's story. 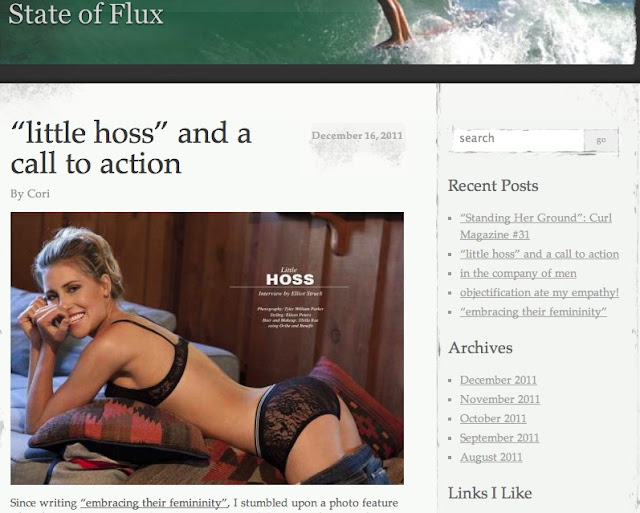 Don’t get me wrong; I appreciate the beauty of a pleasing female & male bodies, however it sucks if sexual arousing aesthetics are favored before athletic skills. Further, and that sucks even more, it is shocking to read reports on the increased violence against women due to such interpretations! 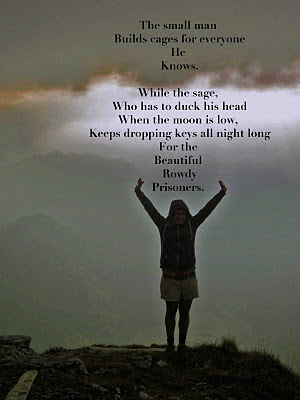 What does freedom mean for you? What is it in the first place?  Freedom is a rare thing and the way we find freedom rarely comes by the way of the forces we think creates it writes John Paul Lederach and I think he has a point. 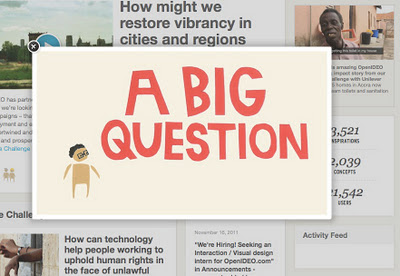 Today I like to share with you a fantastic platform I came across last week. Open IDEO is “where people design better, together”. It is a merge of all walks of life, allowing anyone to participate in challenging global issues such as community, environment and health. Its principles are; inclusive, community-centered, collaborative, optimistic and always in Beta. The online community has been running for a year now and is a sister company of the design & innovation firm IDEO. IDEO has become famous for among other thing its user centered design research methods and the skill set shines through on the vibrant and interactive platform. Open IDEO is beautifully designed, easy to interact with and a inspirational place to be. Watch the video to see how it works.

Check out the awesome PC News Desk of Push Cultures November Edition. A fantastic news coverage of the current vibrating longboard culture spreading the skate love from  Switzerland, Spain, US and more across the globe. 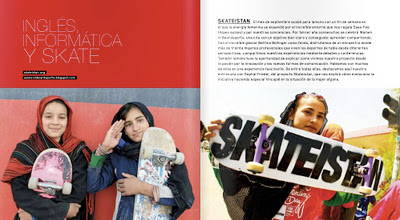 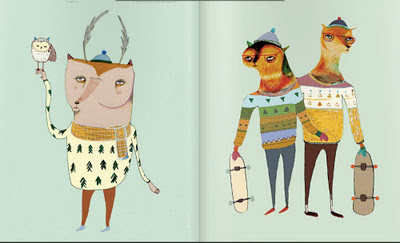 Just before this year's Bright show in Berlin I met the creative Lamono Girls at a Roll-Laden party in Zuerich. Now not long ago I had the pleasure of catching up with them at the Women in Boardsports Retreat. There they took the time to ask about Skateistan and what came out is a beautifu two double spread article. The entire issue is magical and worth a look, or two or three:  lamono magazine
0 comments

Women in War, Women in Peace 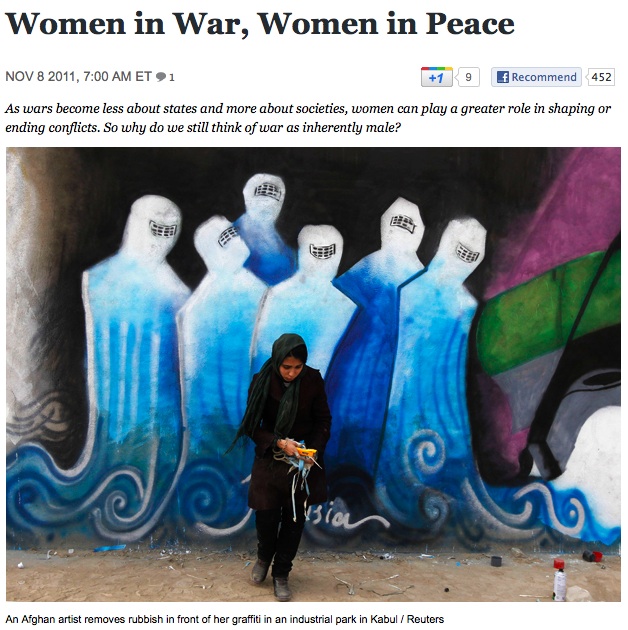 Traditional war gender roles see the man as the hero's and soldiers whereas the women are the caretakers. With that the women play a big part in the success of a waring nation. Only recently scholar picked up on the women in war phenomena.

"understanding war as a male pursuit, we obscure the suffering, the triumphs, and the contributions of women. We also limit our ability to conduct war and to negotiate lasting peace. Without a dramatic shift in our popular conceptions about war and the roles women can play during and after conflict, we will have a harder time escaping the cycle of war and will be unable to find new ways to limit conflicts and rebuild societies". Read more of this insightful article by Diana Wueger on The Atlantic.
0 comments

KABUL a city at work 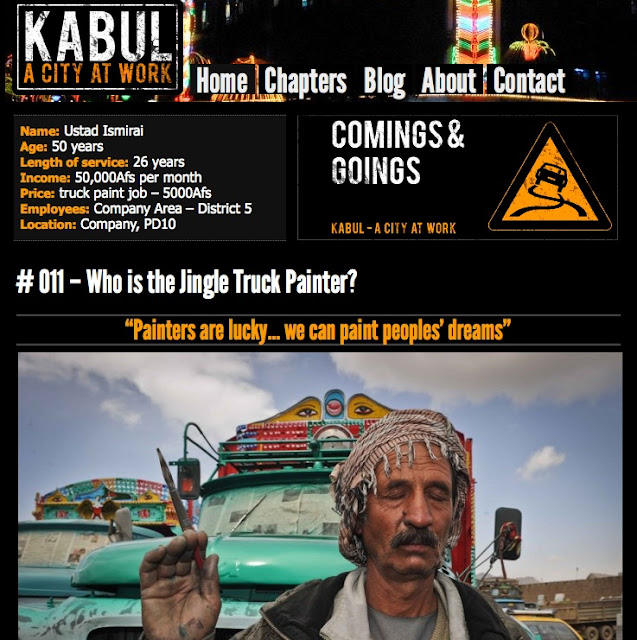 "painters are lucky... we can paint peoples dreams" to "the sound of titanic is like a dick in my brain"

Kabul a city at work is a vibrant platform of Afghanistan capital city and worth a good old look.  It is a collection of beautiful, honest, at times thought provoking articles and interviews of those who keep the 4 million packed city buzzing and alive.
Laid out in several chapters the webpage paints a colorful picture of the people in Kabul. Who is; the Sweet Maker? , the Bulletproof Salesman?, the Child Prodigy? The Female Army General? or the Bonesetter?. Visit www.kabulatwork.tv/ to find out.
0 comments

Warm sunshine, 17 bubbling Ladies on their boards and 1 dog marked the pathway along the river Danube yesterday afternoon. We enjoying the golden autumn light, the company and along the way learned some cool stuff on the board. Girls it was a pleasure to meet you and share some of the longboard love with you. Thank you for the 95-meter high ride at the Prater Tower, it was a super special to see your city from above. Keep on the high spirit and keep on longboarding.Thank you also to Huegelherzblut, Sixxa, Les Ettes and Smile at your Sister for the goodies. 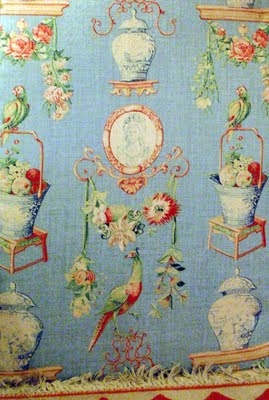 I love this one. Its in a castle in Kitzbuehl, Austria.
0 comments 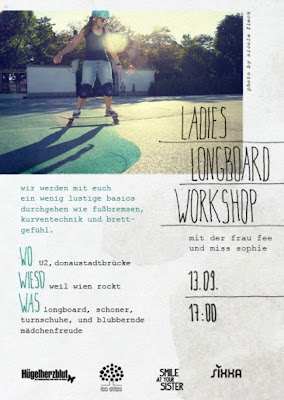 Hello ladies, we are hosting a girly Longboard cruising session at the beautiful Donau Insel in Vienna. We will go trough some basic stuff such as getting some feeling for the board, improving foot breaks and corner techniques. Bring a box of joy, some giggles and your board as well as pads. Meeting on the 13.09 at 17:00 at the Donau Insel U2 train station.
0 comments 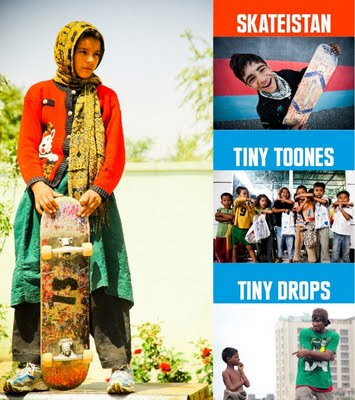 Street cultures such as skateboarding, street art and breakdancing have an intriguing potential to bring people from different social and cultural backgrounds together. They act as a bride to cross  social barriers and cultural differences, thus facilitate exchanges and cooperation on a global scale.

As part of the cultural program of this yeas Asia - Pacific Week in Berlin an exhibition and interactive program on the Empowerment and Intercultural Dialog of Street Cultures is presented. The Program includes a Skateistan photo exhibition in the Hatch Sticker Museum as well as a exhibit of a Hip Hop School in Cambodia & India.

Opportunity to extend the Street Cultures network are plenty during the hosted gatherings, including a  conference on Youth Cultures Development Projects in Conflict Regions as well as musical pleasures for the soul, heart and ears.

Happening in Berlin, Germany from 6. -17. September 2011. For more information check out: From Here To Fame and Revolution Art Magazine.
0 comments 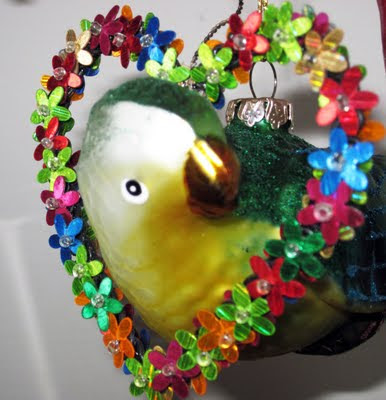 My friend Joshi from Vienna came up with this sentence and I have to share it: "The heart of the revolution is the revolution of the hearts"
0 comments 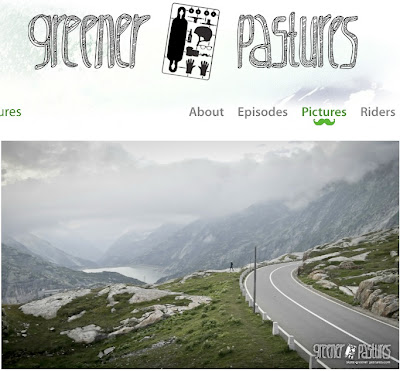 The future of longboarding looks something like that: great riders, incredible styles, fantastic images, beautiful landscapes and steep-long-sick roads or you could say Greener Pastures. Well, nearly. I would say  should get a female rider on board too and than its super perfect! Nevertheless Greener Pastures placed longboarding media on a new level when it comes to portraying the longboarding community. Watch the promo video with Switzer, Koenigshausen and Co.  and follow their progression here.


Beton on Fire is the worlds first event that celebrates the downhill ride with a longboard down a bobtrack. Bobtrack-Downhill was first introduced by inline speedboarders in 1996. Only since 2010 and due to great work pioneer by Danny Strasser are longboarders official permitted to take part in such rides.  Last year I had the pleasure to be invited to this incredible and unique experience. Sadly this time around I could not attend but watch the video footage, that I now like to share with you.  Have a look at Max Stamlers ride on the video above. Also for those German speakers amongst you, do you wan't to know what it feels like to ride a bobtrack on a skateboard? Hacks blog write up can be found here and is well worth your time. Visit the Beton on Fire homepage here. 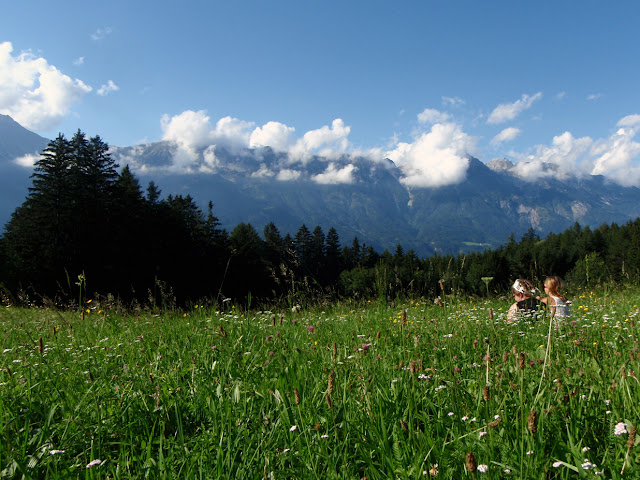 My university has its lecture room high above Innsbruck. On days like today I need a lot of effort to go back inside.
0 comments

Through My Eyes Project 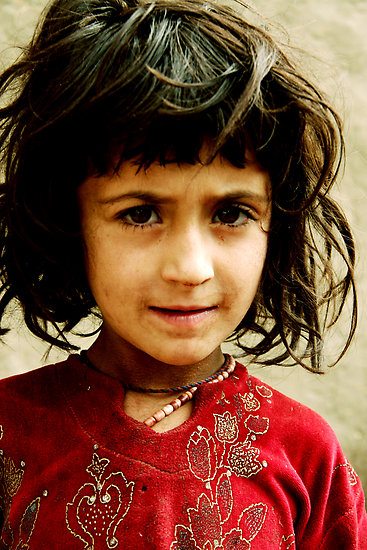 Jake, my ex-housemate was always an inspiration to me and seeing his work randomly pop up in my world makes me remember his beautiful soul. Check out this fantastic article about a project of his in Afghanistan. He has many talents and one of them is to make children smile. He creates spaces for children to share their stories by teaching then how to use cameras but click here read for yourself.
0 comments 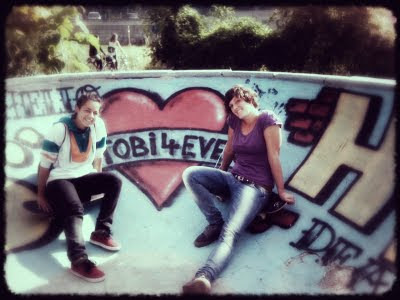 Not Tobi but skate was our theme for the last week. Three girls skating Switzerland, Austria and Germany, finding secrete spots, great spots, deep spots, gnarly spots, steep spots, sweet spots and spots to fall in love with. It has been an adventure. Thank you girls.
0 comments 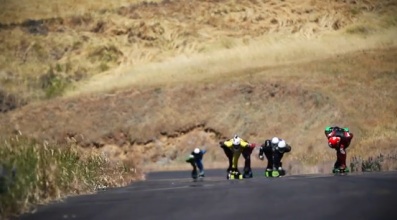 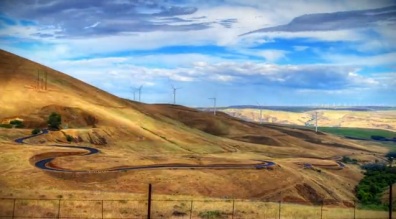 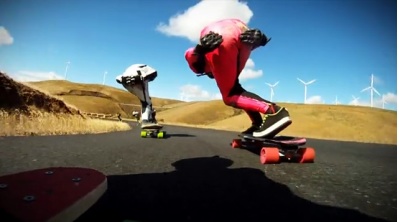 Yvon Labarthe did it again. Beautiful images of a great road, people and on top that captured rad racing and a good soundtrack as well as edit. All together a must watch.
0 comments 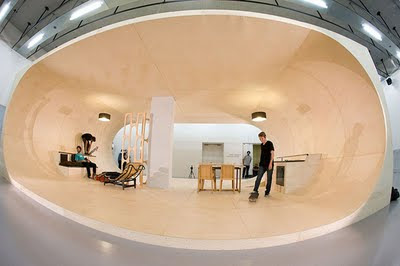 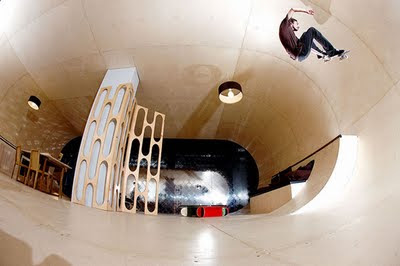 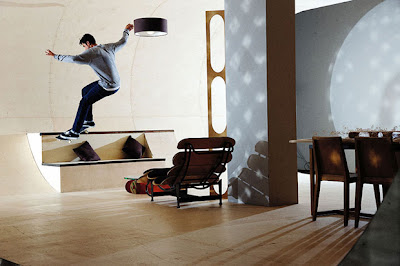 The most RAD idea of a house. Sole technology boss Pierre-Andre Senizergues and his architect friend Francois Perrin make a big dream come possible. The PAS House is a glimpse into the future that shows what powerful influence skateboarding can have on a dwelling place. Not only the walls but also the furniture are skateable! The house is the first house to be designed entirely for skateboarding and dwelling, with wall and ceilings for a continuous surface that creates a dynamic and fluid experience. I love it.
0 comments

Alexandra Pauli uploaded some incredible images of this years Beton on Fire, the event where athletes take Altenbergs Bobtrack as a pipe for downhill skateboarding. Fore more pictures click here or visit her homepage.
0 comments

Skateboarding as a Catalyst for Change in War-Torn Afghanistan 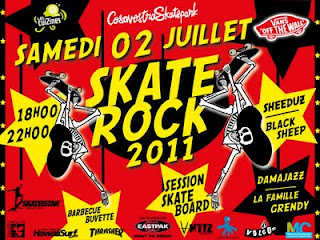 In case you are in Paris, come to the Cosanostra Skatepark tomorrow. My friend Simon will be there telling you all about Skateistan,  there will be a exhibition of Skateistan pictures from Afghanistan and also the french screening of "Skateistan the movie". Not to forget a skate session as well as bbq and music. Two days ago Simon was at Canal Qoquelicot to explain what it is all about. Here you can find his interview.
0 comments

Home is where the heart is... 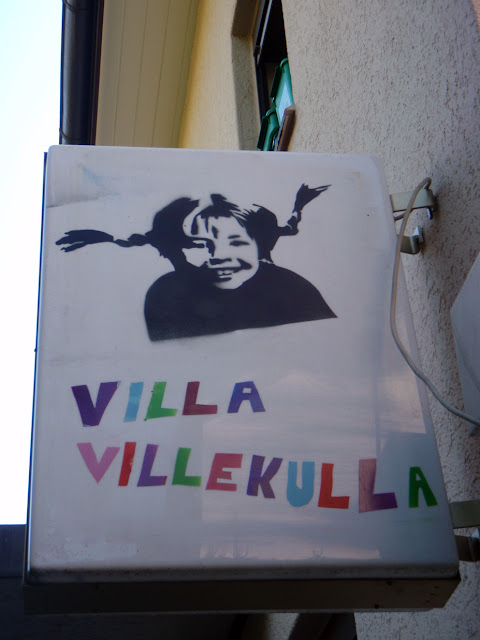 Wow what an amazing home. Thank you to my housemates of the last three months for a great experience. I am going to miss your spirit. Keep on rocking!
0 comments 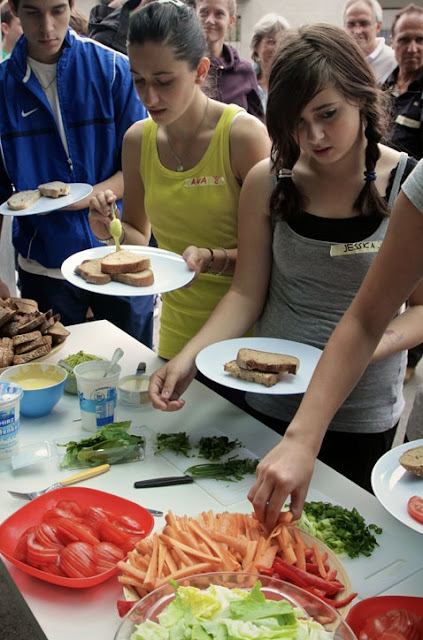 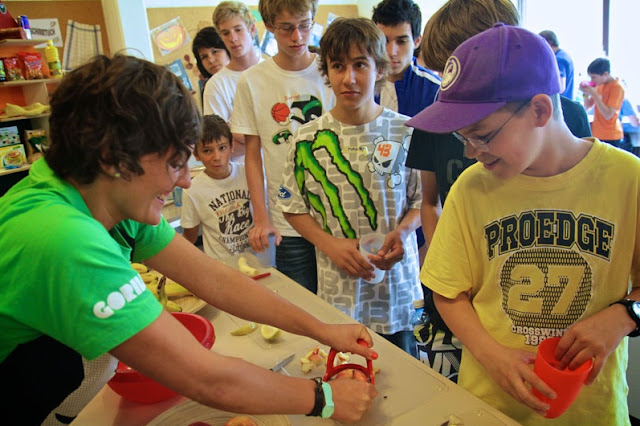 Friday mornings I meet a bunch of gorillas and we are heading to schools all across Switzerland in a cool van with a big truck full of freestyle sport goodies. We share our experience, show the kids new moves and conduct seminars on healthy heating, sport, global development with the food industry and many more interesting things. The other day we had a long drive, including a sleep over as well as a train ride to head to the highest school in Switzerland, located in Pontresina. It was a good trip, cheers guys. Check out more on: gorilla.ch