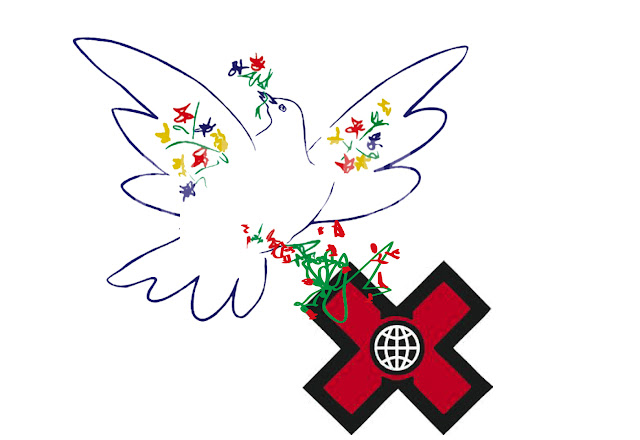 what does the us-navy sponsorship deal say about the x-games? and the relationship between war, peace and skateboarding? what comes in my mind is the popular anti war slogan  ‘bombing for peace is like fucking for virginity’. it does not make sense to advertise the navy at a skateboarding (among other ‘extreme’ sports) event, or does it?

earlier today i watched the winning run of brazilian gold medalist leticia bufoni from yesterday’s women’s skateboarding street x-gameevent on cooler. woop woop!  well done for the great achievement miss bufoni. and well done to all of those who worked hard to improve the price money for the female athletes.

i like to point to something else though, because i was surprised to notice, that the games are sponsored by the us-navy! apparently, the us-navy is sponsoring the games since 2009 call me a jerk who dwells behind the last mountain, but i had no idea.

so when i tuned in earlier i was like: “what the fuck!!!!! - i want to see the women skate and not get brainwashed by: usa’s force for good”, that spreads its warheads across 5 oceans and 7 continents.

in the face of violence that is daily inflicted on this planet it might be absurd to envision a future without war but militarizing skateboarding appears absurd to me as well. actually while watching the ad clip (i was kind of forced to and could not skip it) i was thinking that the war driven mentality of the navy fits rather well with espn’s image to market skateboarding as extreme. or as kyle kusz call’s the x-games a “made for tv pseudo-sports created solely to peddle products to the muchcovered teen male demographic’.

how many ‘extreme’ solders does the navy hope to recruit by advertising at the women skateboard x-games? and where should they go? away from the tv and towards the conflict zones in afghanistan and iraq? oh no those places are old news lets send them to the battle fields in somalia, syria, congo, or the sudan! do the clever minds behind the campaign hope to sign up more female solders that can ‘liaise’ with the so called local women ‘in the field’? or is the driving force behind the advertisement to gain a ‘cool’ or ‘caring’ image?

watching the above clip from sweden and interested to see, what an awesome skateboarder is doing in brazil, it seems needless for me to be force feed a navy commercial. according to the espn website, they will also show their ads for the barcelona as well as munich games. not just any ad but a clip about us-america’s phallus shaped rockets that shoot their load into the air and call it a ‘force for good’.

could the x-games;  that provides job opportunities, pushes the sport in a certain direction and brings joy to countless people happen without the navy?

while organizations such as skateistan or longboarding for peace aim to spread ‘the good’ of skateboarding, the navy appears to recruit skateboarders for the dark side. i know i know, the world is not so black and white. though, i do think it is important to look behind skateboarding’s industry/ culture/ system whatever you like to call it and deconstruct the power relationships to shape the future we want to see.

love to hear feedback and other thoughts on this. what do you think?

18.04.2013 Update: I am pleased to see that the above mentioned advertisement has been taking off the video three weeks after this entry was posted and just in time for the Barcelona xgames.

Thank you for sharing this, as the military involvement in the X-games makes perfect sense. The demographic of the spectators is 15-25 aggressive testosterone filled male skaters. What a better way for the military to gain members. They take the aggressiveness, daringness of the skaters and turn them into killing machines. The recruiters will tell them anything to get them in. Once they’re in the freedom that the skaters get from skating is thrown to the wayside. The military focuses on the aggressiveness and those types of attributes. This is a smorgasbord for the military, much like cockroaches feasting on the next generation.
As to the X-games sponsors, this is a windfall and helps them sell their wares to the masses by way of patriotism. The whole thing makes my stomach turn.
To all you skaters out there: Go to school and get an education. Then skate as much as you want, and continue with your artistic creations. You don’t have to take your aggressiveness and be turned into killing machines.

i ditto your comment sheri,
thank you for sharing.

smile at your sister said...

it's easy to understand why the army wants to be involved in the x-games. what's more interesting to me is how it is possible that they actually are.

the boardsports business seems to be broken and absolutely unscrupolous.

yes thank you smile at your sister! well they have money and i hope it benefits all the competing athletes.

at the end its a business as any other business i guess. i do see 'other ways of doing business' popping up on all sorts of corners though and i like it.